You are here: Home / News / Iowa’s Ernst and other Senators want committee to investigate USOC and U.S.A. Gymnastics 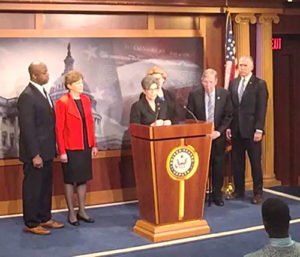 Ernst at the news conference with other Senators.

Iowa Senator Joni Ernst joined colleagues from both parties today (Wednesday) to announce they are backing a resolution to establish a special committee in the Senate to investigate the way the U.S. Olympic Committee (USO) and U.S.A. Gymnastics handled the situation with former team doctor Larry Nassar’s sexual abuse of female gymnasts.

“While it began with the conviction of Larry Nassar — that is not where this ends — it does not end there,” Ernst says. “The reprehensible actions of this so-called doctor have been exposed, yet so many questions remain.” She says there are a couple of key questions that they hope to get answers to.

“Why was this disgusting man allowed near our young female athletes when there were reports the USOC leadership new about the sexual abuse allegations? Why didn’t the USOC and U.S.A. Gymnastics not take immediate action remove him when the horrifying allegations were brought to their attention in 2015?,” Ernst asked. Ernst says she takes the issue very personally as she volunteered to work at a crisis shelter for women while in college.

“Recently as I read the reports about the many failed opportunities to protect these young women — and in many case these children from this monster Larry Nassar — I had those same feelings of same anger and frustration from years ago when I was working at that women’s crisis shelter,” according to Ernst. Ernst praised the gymnasts who came forward with their stories and testified against Nassar, leading to his conviction.

The resolution establishes a special committee of the Senate with the specific tasks of:

-Investigating the USOC and national sports governing bodies, including U.S.A. Gymnastics, and determining the extent to which these organizations were complicit in the criminal or negligent behavior of their employees relative to sexual abuse;

-Identifying and recommending solutions to the systemic failures at the USOC and national sports governing bodies, including U.S.A. Gymnastics, that allowed for pervasive sexual abuse to continue for decades;

-Identifying actions that must be taken by the USOC and national sports governing bodies, including U.S.A. Gymnastics, to ensure increased transparency and protections for children, athletes and their families; and

-Making findings and recommendations on any additional actions that may be necessary to hold the USOC and U.S.A. Gymnastics accountable.

Senators Shaheen and Ernst on Friday called for U.S. Olympic Committee CEO Scott Blackmun to step down in light of news reports that Blackmun was aware of sexual abuse allegations against Nassar in 2015. The news came one week after Blackmun published a letter to Team U.S.A., pledging an independent investigation to uncover “who knew what and when,” while failing to admit his own supposed direct knowledge of allegations that were brought to his attention.