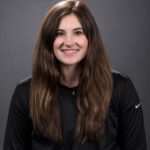 Gustafson averaged 29.0 points, 15.0 rebounds, 5.0 assists, and shot 74.2 percent from the field and 92.3 percent from the free throw line in a pair of Big Ten wins last week. She led all scorers with 33 points on 13-of-19 shooting in Iowa’s win over Penn State on Feb. 9. Gustafson grabbed 14 rebounds and dished out a career-high seven assists against the Lady Lions. She registered 10 points and four rebounds in the fourth quarter to seal the win for the Hawkeyes.