You are here: Home / Sports / Hawkeye women earn victory No. 20 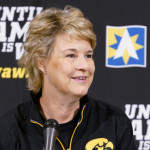 With a 70-61 victory over Northwestern on Sunday, the University of Iowa women’s basketball team has reached 20-or-more wins nine times in the last 11 seasons.

The Hawkeyes improved to 20-6 overall, 8-5 in the Big Ten by shooting 57 percent from the field and leading for 37 ½ minutes in front of 1,363 inside Beardsley Gymnasium. Iowa is 4-0 in the month of February.

A strong first quarter gave the Hawkeyes a 21-13 lead after 10 minutes. They made eight of 16 field goals and all four free throws while out-rebounding the Wildcats, 12-7.

“We got off to a great first quarter and that’s four games in a row,” said Iowa coach Lisa Bluder. “We came out aggressively to start the game.”

Junior center Megan Gustafson scored 25 points with 16 rebounds, marking the 24th time this season she has recorded a double-double. She now has 51 career double-doubles. Gustafson made 10-of-12 field goals and was 5-of-5 from the line.

Two other Hawkeyes scored in double figures: sophomore Kathleen Doyle added 15 points with six assists and four steals and sophomore Makenzie Meyer scored 12 points. Meyer was 5-of-8 from the field and made two 3-point field goals.

The Hawkeyes return to action next Sunday by hosting Wisconsin.