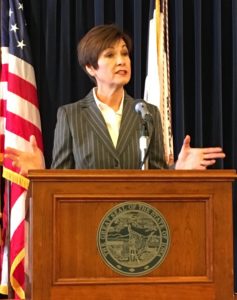 Governor Kim Reynolds is “strongly opposed” to any Iowa city declaring itself a “sanctuary” in an effort to shield undocumented immigrants from deportation.

“One of my top, number one priorities to make sure that Iowans are safe and so, by doing that, I think we need to honor the laws that are on the books and if they’ve made a decision to break the law, I don’t think it’s unreasonable to say we need to bring the federal government in and have them follow through with the laws that are on the books,” Reynolds told reporters this morning.

Earlier this month, Reynolds sent a campaign fundraising email that criticized Des Moines and Iowa City for moving “closer to being sanctuary cities.”

“Because I don’t believe it’s right,” Reynolds said today when asked why she sent the email about sanctuary cities.

The police chiefs from Storm Lake, Marshalltown, Iowa City and Des Moines told legislators last week there are no sanctuary cities in Iowa.

In her fundraising email, Reynolds, in the fundraising email, praised “Republican leaders in the Iowa Legislature” for “taking action” and drafting a bill that would deny state funds to “sanctuary” cities in Iowa. And Reynolds asked her supporters to “stand with the rule of law” by making a donation to her campaign and sending a message “to far-left liberals in Des Moines and Iowa City on this important issue.”

“If an individual has come here illegally and they have made a choice to break the law, then they should be held accountable,” Reynolds told reporters this morning.

President Trump has outlined a plan that calls for enhanced border security, reducing legal immigration and addressing the status of the so-called “Dreamers”. Reynolds today calls that a “great place” for congress to start its deliberations.

“My challenge is for them to sit down, hash through the differences, find consensus and let’s provide certainty for many, many young people who were brought her through no choice of their own,” Reynolds said.

The U.S. Senate is scheduled to begin debating immigration this evening. Iowa Senators Chuck Grassley and Joni Ernst announced Sunday night they are co-sponsoring a proposal that would spend 25 billion dollars on border security and provide legal status to 1.8 million people who have or could have signed up for President Obama’s DACA protections.