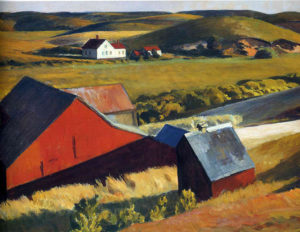 Art museums in Cedar Rapids and New York City have made a rare temporary trade of some of their most valuable works.

Kate Kunau, associate curator at the Cedar Rapids Museum of Art, says they’ve loaned 27 pieces from Iowa native Grant Wood to the Whitney Museum of American Art in exchange for more than a dozen works from famed realist painter and printmaker Edward Hopper.

“They’re both artists who were working in mostly the first half of the 20th century and they’ve become really associated with specific ideas of Americana,” Kunau says. “Of course, Grant Wood associated with the rural and Hopper more with the urban, Grant Wood with the ’30s and Hopper more with the ’40s and ’50s. It’s a really wonderful reciprocal trade and it’s very appropriate for us.”

Hopper is perhaps best known for the painting “Night Hawks,” which depicts a quiet nighttime diner scene in an otherwise-empty downtown. That work isn’t in Cedar Rapids, however: “All four of his prints that we have on view currently look very much like ‘Night Hawks’,” Kunau says. “There’s a lot of very dramatic film noir-esque light, solitary figures which is very typical of ‘Night Hawks’ and Hopper’s work overall.”

Hopper is recognized as one of the most influential American artists, praised for his mastery at painting light, his eloquent realism, and his unique awareness to modern American life.

There are 13 Hopper works in the exhibit, which opened February 3rd and runs through late May.

“We kind of go through Hopper’s early career and the earliest one we have is from 1906 and they go until 1933,” Kunau says. “‘Cobb’s Barns and Distant Houses’ is a very Hopper-esque work with his kind of signature stylized, hard-edged style that I think people will recognize.”

If you’d also hoped to see some Grant Wood paintings in eastern Iowa, never fear. The Cedar Rapids museum loaned out 27 of them but rotated a few dozen back onto the walls from its collection of nearly 300.