You are here: Home / Education / Senators ponder pickups as school transportation for extracurriculars 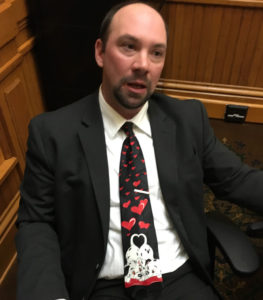 Legislators are considering a bill that would let school districts use pick-up trucks to transport students to extra-curricular activities, but only if the students are in the truck cab and using a seat belt.

Senator Waylon Brown, a Republican from St. Ansgar, says current state regulations forbid the practice, as Sheldon school officials discovered after they bought a pickup for the activities of a Future Farmers of America chapter.

“With the intent to be able to transfer their produce from where it was growing to locations where it could be sold,” Brown says, “unbeknownst to the that they couldn’t transfer students in that pick-up as well.”

Brown and two other senators reviewed a proposal this morning that would let schools transport up to nine students as passengers inside a pickup cab, if there are seat belts for each. There would be weight limits for what could be carried in the truck bed and no student would be allowed in the pickup if it’s being used to tow something.

Brown says there may be other requirements included, but the intent of the bill is not to let schools use pickups on bus routes to and from school.

“The intent of this is to be able to allow the students in extracurricular activities, which is what FFA is, to be able to transport either goods that they’ve raised maybe to a farmers market, or maybe in the spring of the year they have a test plot…and they need to get seed or other supplies out to the test plot,” Brown says, “and it’s going to allow them the ability to use this pick-up to transport.”

Iowa Department of Education director Ryan Wise says the safety of students is the top priority for any school transportation policy, but he hasn’t reviewed this proposal about pickups and cannot comment on it.