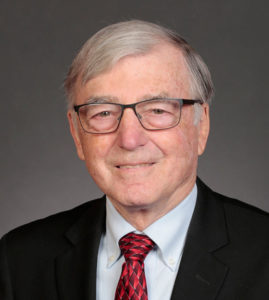 A bill that’s ready for debate in the Iowa Senate would require five of the seven justices on the Iowa Supreme Court to agree when ruling that a state law is unconstitutional.

Senator Julian Garrett, a Republican from Indianola who is an attorney, said during committee debate last week that a “super majority” is preferable to a nearly split four-to-three opinion that would overturn a state law.

“There have been a whole series of cases over many years when major changes in our society have been made not through the legislative process — not through the people’s representatives, but just based on the opinion of a majority of judges on a court,” Garrett said.

Senator Nate Boulton, a Democrat from Des Moines who is also an attorney, argued in committee that a change like this should be done through a vote of the people on a constitutional amendment rather than a vote among legislators on a bill.

“It is certainly interesting that in terms of determining how many justices are required to interpret the constitution, we’re doing this with a statutory action, not a constitutional amendment, not anything more serious than that,” Boulton said.

Only two states — Nebraska and North Dakota — require “supermajorities” on their courts to overturn state laws. Other critics Garrett’s bill wouldn’t have impacted the Iowa Supreme Court’s 2009 Iowa Supreme Court opinion which legalized same-sex marriage in Iowa. That was a unanimous opinion.