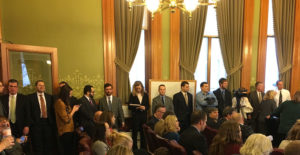 Several people turned out for the budget subcommittee meeting.

A 90 minute event at the statehouse early this morning gave lobbyists and a few members of the public a chance to weigh in on the $1 billion tax cut package Republicans in the Iowa Senate unveiled yesterday. Senator Randy Feenstra, a Republican from Hull, opened the subcommittee meeting by calling Iowa’s current tax system complicated and onerous.

Iowa Chamber Alliance president John Stineman was among the lobbyists paid to monitor legislation who said they hadn’t had time to read the 130 page bill.

“All that being said, if we’re having a conversation about first impressions of the legislation…there’s a lot for us to like in this bill from a business perspective,” Stineman said.

Charlie Wishman of the Iowa Federation of Labor suggested a billion dollar tax cut will worsen the state’s budget woes.

“I have not read every page of this bill, but I do understand basic math,” Wishman said. “…I just don’t see how we can be making humongous tax cuts like this that don’t match the other side of the ledger.”

In addition to a 30 percent reduction in PERSONAL income taxes, the bill would cut the state’s corporate tax rate from 12 to seven percent. Jennifer Kingland of the Iowa Taxpayers Association indicated her group is still reviewing the bill, but she said it appears to create a “simpler, fairer, less complex tax structure.”

“The corporate rate right now is a disincentive for businesses to come to Iowa, so we’re very happy to see that piece in the legislation,” Kingland said.

Brad Hudson, a lobbyist for the Iowa State Education Association – the state teacher’s union, said there’s no assurance, yet, of how federal tax cuts may impact state tax collections.

“We’re here to oppose this and ask you to slow down until we get our house in order,” Hudson said.

Others who testified objected to provisions in the bill that would get rid of tax credits for fire fighters and EMTs as well as the solar industry. Derek Sadler owns Current Renewable Efficiencies, a business that installs solar panels. He asked lawmakers why a tax credit for research activities that’s claimed by some of the state’s largest businesses will continue, but the limited tax credit for installing solar panels will be eliminated.

“We see the jobs it creates across Iowa. These are jobs that are being created in rural areas, which is very hard to do in Iowa,” Sadler said. “…Our operation’s out of Shell Rock, Iowa, and if anyone knows where that is, there’s not a lot of new business investment going into there.”

Representatives of the state’s financial community weighed in on the bill, too, as it would change tax policy for credit unions. A Senate committee is scheduled to start debating the bill at 2 p.m. today. Democrats on the panel complain the bill’s being rushed through without giving the public a chance to review the details.