You are here: Home / News / Motorcycle riders lobby lawmakers, meet with the governor 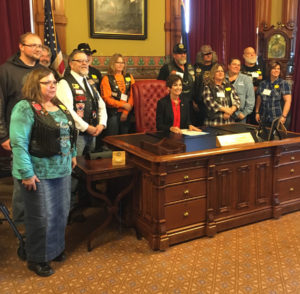 The governor with motorcycle riders.

Dozens of people wearing the “biker uniform” of jeans and leathers were at the state capitol Wednesday to lobby legislators.
A small group from “A Brotherhood Aimed Toward Education” — known as ABATE were present in the governor’s office as she signed a proclamation about motorcycle safety. It calls on people behind a vehicle’s steering wheel to be aware and share the road with motorcyclists.

Governor Kim Reynolds told the group her husband, Kevin, was “an avid biker” when they first got married. “We had a Gold Wing. After we had two children, we had to sell (the motorcycle) for a minivan and that is a true story,” Reynolds said, laughing. “…Hopefully, someday, we can get back to our motorcycle ridin’ days.”

Reynolds did not reveal if she and her husband wore helmets during their early years as a married couple. Iowa is among three states that do not require motorcyclists to wear helmets. A

BATE is opposed to a mandatory helmet requirement, arguing helmet laws do not stop accidents.