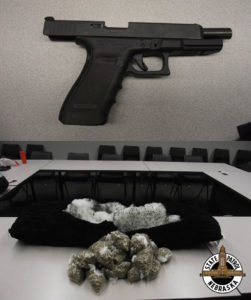 Gun and drugs seized in Nebraska.

Four Iowans are jailed in Hall County, Nebraska, after a traffic stop Wednesday on Interstate 80.

A Nebraska state trooper says the car ran a stop sign before turning onto a highway and then onto the interstate. After stopping the vehicle, the trooper smelled marijuana and searched the car. He found a handgun that was reported stolen in Des Moines as well as four pounds of marijuana.

Those arrested are identified as: 18-year-old Donovan Patterson, 20-year-old Alyse Simmons, and 21-year-olds Dawan and Darrion Patterson. All four are all from Des Moines.