You are here: Home / News / Hindu cleric prays for illumination during invocations at Iowa capitol 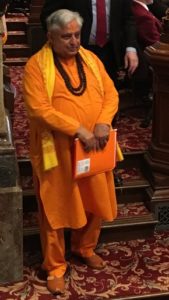 A Hindu cleric delivered the opening prayers in both the Iowa House and Senate today.

Rajan Zed read scriptures from Sanskrit, followed by the English translation of the prayers.

“We meditate on transcendental glory of the diety supreme who’s inside the heart of the Earth, inside the life of the sky and inside the soul of the heaven,” he prayed. “May he stimulate and illuminate our minds.”

Zed recited passages from the “Song of the Lord” as well as other scripture. He began and ended his invocation with a two-letter syllable Hindus believe contains the universe.

Sanskrit, the sacred language of Hinduism, is the “root” of European and Indian languages, according to Zed. Zed, who lives in Reno, Nevada, is president of Universal Society of Hinduism and he arrived in Iowa this weekend. He’s met with local clerics from the Catholic, Baha’i and Jewish faiths. On Sunday afternoon, Zed spoke at the Hindu Temple and Cultural Center of Iowa, located near Madrid.

“We are very open minded,” Zed said, during an interview, when describing Hinduism. “We are the oldest religion in the world.”

About 500 families worship at the Hindu temple near Madrid. There also are Hindu temples in Cedar Rapids, Fairfield and the Quad Cities. At this time of year, Hindus gather for their annual “Holi” celebration — often called the festival of colors — to mark the triumph of good over evil and the arrival of spring.