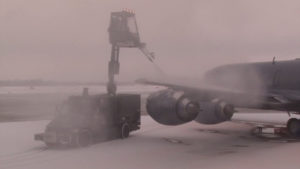 Snow and ice this February in Sioux City created extra duties for members of the 185th Air National Guard Refueling Wing. Crews must prepare the “Stratotankers” for flight in all weather conditions.

“It’s Iowa. It’s winter. You’re going to have this,” says Chief Master Sergeant Mark Wankum, the maintenance chief for aircraft at the base. “Granted, this year we’ve had a lot more snow than in the past couple years, but you know we just all come out. We get together. We do it. We come up with a game plan.”

A special solution is used for the “de-icing” process.

“We heat that in the truck to 185 degrees and then we spray the aircraft with that,” he says. “That’ll help melt off any more ice that’s left behind or any snow that just won’t leave. Then, once it melts it off, we can just blow the big chunks off with the hot air.” 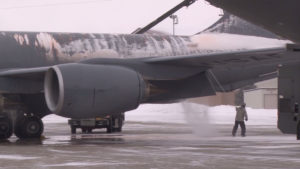 But if there are still spots of ice or snow on the planes, crews have to manually brush it away. Icy runway conditions make that tricky work, according to Wankum.

“Of course, you’ve got to allow more time,” Wankum says. “It takes a little longer to get around…just because of the slick conditions…You’ve got to be careful so we’re not letting everybody fall all over.”