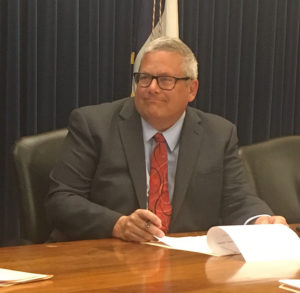 The U.S. Senate took a voice vote today and approved Iowa Ag Secretary Bill Northey for a top job in the U.S. Department of Agriculture.

Texas Senator Ted Cruz placed a hold on Northey’s nomination in October, protesting the success ethanol backers had in maintaining the Renewable Fuels Standard. Northey issued a statement today, saying while the confirmation process took longer than expected, he’s excited to go to work in the USDA.

Northey has been Iowa’s secretary of agriculture for 11 years. He called it “the honor of a lifetime” to serve in that role. Details on Northey’s swearing in for his new post are not yet available. He’ll be the under secretary in charge of USDA crop programs.

Read statements about Northey’s confirmation below.

“It is a tremendous honor for me to be confirmed to serve as an Under Secretary of Agriculture.  I want to thank President Trump for nominating me and Secretary Perdue for his support and encouragement throughout the confirmation process. I also want to thank Iowa Senators Chuck Grassley and Joni Ernst for their strong support and their tireless work on behalf of my nomination. I greatly appreciate Chairman Roberts, Ranking Member Stabenow and the entire Senate Ag Committee for their bipartisan support of my nomination. I look forward to continuing to work closely with them in this new role.

“While this process has taken longer than expected, I remain as excited as ever to work with Secretary Perdue and the staff at USDA to support of our nation’s farmers and ranchers.

“I want to express my deep appreciation to the people of Iowa for affording me the opportunity to serve in this role for the past eleven years. Working with and learning from the men and women who make Iowa agriculture the dynamic and productive industry that feeds the world has been honor of a lifetime.”

“Bill Northey is a talented, passionate, hard-working Iowan, and I am excited to see him serve in this new role.

“Bill served Iowans as Secretary of Agriculture for more than a decade. His time was marked with significant progress and innovation in agriculture, including water quality. He also provided our state with rock solid leadership in times of droughts, floods and an avian flu outbreak.

“Through it all, his commitment to this state and its people never wavered. Iowa is better thanks to his service, and the nation will be better with Bill in his new role as Under Secretary of Agriculture for Farm and Foreign Agricultural Services.”

JOHNSTON, IOWA – Today by voice vote, the U.S. Senate confirmed the nomination of Iowa Secretary of Agriculture Bill Northey to the position of USDA Under Secretary for Farm Production and Conservation. In response to Northey’s confirmation, Iowa Renewable Fuels Association Executive Director Monte Shaw made the following statement:

“Today’s vote was long overdue, but very welcome. Under Secretary Northey has been an outstanding Secretary of Agriculture for Iowa and he will undoubtedly be an excellent leader at USDA. The Trump Administration needs more voices that echo, not contradict, Trump’s own support for the Renewable Fuel Standard (RFS). Today’s confirmation marks a victory for farmers and biofuels supporters across the country.

“For four months, Senator Ted Cruz has used his hold on the confirmation vote as a political football in an attempt to undermine the RFS. While it took too long, Senator Cruz finally realized that Northey had no interest in being confirmed on the back of dismantling the RFS. Iowa Senators Chuck Grassley and Joni Ernst head to the White House today determined to push back against the false narratives Cruz continues to push in his efforts to gut the RFS and preserve the petroleum monopoly on our fuel supplies.”

Northey was nominated to fill the position in September 2017. His nomination was approved unanimously by the Senate Agriculture Committee. After a 4-month hold by U.S. Senator Ted Cruz, Iowa’s agriculture secretary has finally been confirmed to fill the USDA position. Cruz released his hold earlier today.

WEST DES MOINES, Iowa – February 27, 2018 – “For the past decade, Bill Northey has served admirably as Iowa’s Secretary of Agriculture, and we wish him all the best in his new role with the USDA leading the newly-created office of Farm Production and Conservation.

Under the leadership of Secretary Northey, Iowa’s agricultural economy has grown and diversified, and Iowa continues to be recognized as a national leader in conservation.  Northey has been instrumental bringing new conservation opportunities and advocating for Iowa farmers seeking new and improved conservation practices on their farms.  Northey has received praise and accolades for spearheading Iowa’s Nutrient Reduction Strategy which has been held up as a model for states in the Mississippi River Watershed.

Secretary Northey’s years of work improving water quality and conservation makes him extremely qualified to lead this new office within the USDA.  It’s important to have someone who truly understands agriculture in this important role, and Northey’s experience as a farmer, success leading the Iowa Department of Agriculture and Land Stewardship (IDALS), and strong work ethic makes him a great fit for the position.  We look forward to continuing to work with him in his new role.”

On behalf of Iowa corn farmers, we congratulate Iowa Secretary of Agriculture Bill Northey on his appointment by U.S. Department of Agriculture Secretary Sonny Perdue to Undersecretary for Farm Production and Conservation (FPAC). Throughout his distinguished tenure as Iowa Secretary of Agriculture, he has been a tireless advocate for Iowa’s corn farmers, and we are thankful to have someone with such a deep agricultural leadership background in this vital position.
It is good to see one of our own rise through the ranks to this well-deserved appointment. Throughout his career in agriculture, Northey has been a leader in a variety of farm groups including serving as Iowa Corn Growers Association (ICGA) President from 1991-92 and as National Corn Growers Association President and Chairman in 1995-97.

Northey is a fourth-generation Iowa farmer that grows corn and soybeans on his farm near Spirit Lake. In his three-terms as Iowa Secretary of Agriculture, he has promoted science and technology-based solutions to better conserve our soil, water and air, helped to expand ethanol infrastructure in our state and helped tell the story of Iowa agriculture including through his avid use of social media.
In his new role as USDA’s Undersecretary of Farm Production and Conservation, he will oversee the Farm Service Agency, Risk Management Agency and the Natural Resources Conservation Service.

We look forward to working with him on several important issues including pushing for new markets for agricultural exports, expanding the role of higher blends of ethanol in our nation’s fuel supply, preserving funding for risk management and conservation programs in the 2018 Farm Bill and the roll out of the GMO labeling standard.

ANKENY, Iowa) – The United States Senate has confirmed Iowa Secretary of Agriculture Bill Northey as the United States Department of Agriculture Undersecretary for Farm Production and Conservation. Iowa Biodiesel Board Executive Director Grand Kimberley issued the following statement:
“We congratulate Bill Northey, who will be a great advocate for farmers nationwide. As a farmer, and as Iowa’s Secretary of Agriculture, his background and experience will be critical as Congress begins crafting a new farm bill in 2018. Bill has always been a staunch supporter of renewable fuels, like biodiesel, and the Renewable Fuel Standard, and his department in Iowa capably administered important programs like the Iowa Renewable Fuels Infrastructure Program. We know he will make Iowa proud once again.

“With his proven devotion to American agriculture, we know that Bill will keep the interests of farmers at heart as he tackles issues affecting agriculture in Iowa and beyond.”

“Iowa’s pork producers congratulate Sec. Northey on his confirmation and applaud him for enduring this longer than anticipated process. He has been a true friend to the industry and a great advocate for Iowa agriculture. We wish him well in his new position representing agriculture and farmers’ interest across the United States and look forward to his service with USDA.”