You are here: Home / Human Interest / Valuable artifact or junk? Iowans can meet with archaeologists this weekend 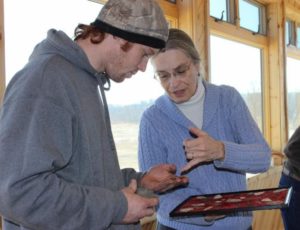 Cherie Haury-Artz discusses an arrow head with a visitor to the Archaeology Road show in 2016.

If you’ve ever stumbled across an object in an Iowa corn field which you think may be a dinosaur bone or a stone tool from an earlier civilization, now’s the time to have your questions answered.

An Archaeology Road Show is planned for this weekend at the Whiterock Conservancy in Coon Rapids, according to executive director Dan Gudahl.

“This is one event that we’ve held for a couple of years now that encourages people to come in and bring whatever they’ve got that they know what it is — or they don’t know what it is — that may have some sort of history to it, whether it be artifacts from Native Americans or fossils or rocks or whatever,” Gudahl says.

Two experts from the Office of the State Archaeologist will be at the conservancy on Saturday to analyze whatever potential treasures Iowans may bring in.

“It’s quite amazing to see fossilized bones from past eras, epochs, that are from animals that are now extinct,” Gudahl says. “That’s quite unusual.”

In past years, items brought in typically date from long before Iowa became a state to its first human inhabitants, things like arrowheads, axe heads and shards of pottery.

“This year, we’ve got a fellow that’s going to bring in a large rock-bowl, carved out of rock that was used for grinding,” Gudahl says. “He was just using it as a dog bowl, like for feeding his dog, and determined, hey, this has some archaeological significance.”

From 1 to 3 PM Saturday, the experts will examine items brought in by the public with a discussion from 3 to 4 PM. The event is free at the Bur Oak Visitors’ Center at Whiterock Conservancy on Highway 141 in Coon Rapids.