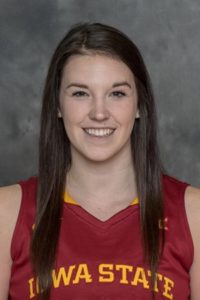 Iowa State women’s basketball junior guard Bridget Carleton was yet again honored for her excellence on the court, after being tabbed one of just six unanimous selections to the All-Big 12 First Team. She joins just Texas’ Brooke McCarty and Baylor’s Kalani Brown as the only three Big 12 players to be a unanimous selection in back-to-back seasons.

Carleton is averaging 18.8 points, 6.7 rebounds and 3.6 assists on the year, but an even more impressive 19.3 points, 6.6 boards, 3.1 assists and 2.0 steals in conference action. She has reached double figures in all 29 of Iowa State’s games and was named a top-10 finalist for the Cheryl Miller award for her efforts on the court.