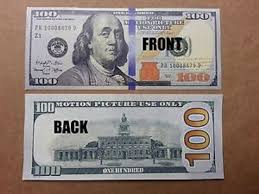 This is a fake bill that recently was passed in Le Mars.

Another community in northwest Iowa is reporting the appearance of counterfeit cash. A bank and a business in Le Mars were both passed bogus bills in the past few weeks. Fakes have also turned up recently in Spencer, Storm Lake, and Graettinger.

One of the recent incidents in Le Mars involved a fake $50 bill, which was clearly a counterfeit, while the other case involved a $100 bill that was marked “For Motion Picture Use Only.” Unfortunately, he says that movie currency looks realistic and is readily available over the internet.

The chief says anyone who handles money should keep a sharp eye out for the counterfeits.

Magic marker-style pens that are made specifically for checking the authenticity of bills are a must for any business that takes in a lot of big bills.

“You can buy these readily online and they’re inexpensive,” Vande Vegte says. “In fact, we looked yesterday and there was a 5-pack for $7, so you can jump right on the internet and buy them.”

The chief says he believes the two recent cases in Le Mars are -not- connected as the types of fake cash passed were so different.