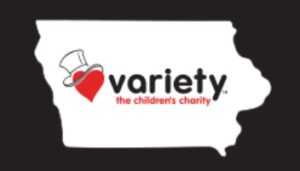 Megan Grandgeorge, spokeswoman for the Des Moines-based charity, says this is the 44th year for the telethon and it will feature a host of stars who are flying in from all over the world.

“Some names you might know include WWE wrestling star Jim ‘Hacksaw’ Duggan,” she says. “We have David Anthony Higgins who’s a Des Moines native who’s been on hit TV shows like ‘Mike and Molly’ and an array of talented band members and cast members and it all goes to help Iowa children.”

Grandgeorge says last year’s telethon was one of the most successful, pulling in $4.1 million. By comparison, the first telethon in 1975 raised $150,000 to benefit Blank Children’s Hospital in Des Moines.

She says, “We have five programs but our biggest program is our grant program in which we grant out money to between 70 and 100 different children’s organizations each year.”

The telethon will run from 7 PM to midnight tonight and will resume at 7 AM Sunday, running until 5:30 PM. It will air live on WOI-TV in central Iowa and will stream live at www.varietyiowa.com.