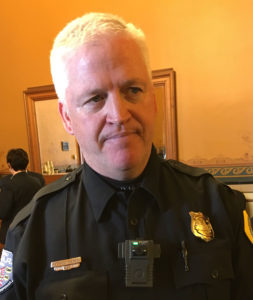 There’s currently a hodge-podge of policies for the video footage generated by the body cameras and dashboard cameras police agencies in Iowa use.

Iowa lawmakers may convene a wide-ranging work group later this year to examine the issues and recommend a statewide policy for the videos.

According to Daniel Zeno of the American Civil Liberties Union of Iowa, there are key questions about the public release of police camera footage.

“Is it an open record? Is it not? When is it?” Zeno said today. “And so this would be an opportunity to kind of flesh out those details.”

How long the video footage is kept varies from agency-to-agency. Victims rights advocates argue some police video of domestic calls should be kept private, to protect children who may be seen in the footage. Susan Patterson Plank, executive director of the Iowa Newspaper Association, spoke at a House subcommittee meeting on these issues this morning.

“We have an appreciation for how complicated this issue is,” she said. “We understand that a lot of people want to be engaged and we look forward to an active conversation about the issues that affect everybody on this one.”

Dustin Miller, a lobbyist for Iowa Broadcasters Association and the Iowa Newspaper Association, said getting clarity on the public release of police video would be helpful.

“But certainly there are other aspects like maintenance, costs, even seeing how the equipment actually works,” Miller said.

Matthew Harkin is a Des Moines policeman who wears a body camera daily. He wore it to the statehouse meeting today and asked legislators to consider input from the 3800 members of the Iowa State Police Association.

“Technology has far outpaced the law on this and we look forward to working with them and getting a common sense bill that’s going to help out all Iowans,” Harkin said.

“The statute was initially adopted back before anybody had an idea that there would be body cameras or things would be recorded and stored on computers and all these other things that go on,” Johnson said. “The law hasn’t kept up with reality.”

Without a state law outlining police camera policies, Johnson said some disputes are now being taken to court. The Iowa Public Information Board is in the midst of a two-year-old battle over the release of Burlington Police video of a fatal shooting.