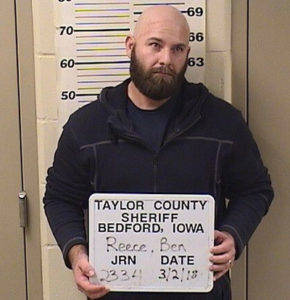 A man who violated his pretrial release and fled to eastern Europe has been returned to southwest Iowa’s Taylor County.

According to the Taylor County Sheriff’s Office, 35-year-old Ben Reece is back on U.S. soil after allegedly skipping out on bond in 2017 and fleeing the country. The sheriff’s office says Reece was arrested in December 2016 on three counts of second-degree sexual abuse before posting bond in April 2017.

Reece surfaced in December 2017 when he was arrested in Armenia. Following a lengthy process involving several governmental agencies, Reece was extradited back to the U.S. earlier this month and is being held on $1 million bond.