You are here: Home / Agriculture / Sales of beef to China going well for Omaha exporter 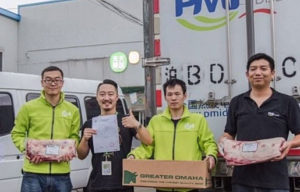 Beef from Iowa is going to China through an Omaha exporter.

An official with the beef production plant, which became the first to ship beef to China when that market reopened last summer, says sales to the country are going well.

Jerry Wiggs is the senior director of export sales and marketing for Greater Omaha Packing Company. “Like any new market, it has its challenges,” Wiggs said. “However, if I do a comparison of where I was in the first eight months of, say, shipping to Europe, compared to where we are eight months into shipping beef to China, we are probably a 1,000-percent more…shipping into China than what we were into the European Union.”

Many cattle producers in southwest Iowa supply animals to the Omaha facility. According to Wiggs, there’s great potential for U.S. beef in China because of its growing middle class population.

“I’ve been to China now three times in the last six months and it is amazing the growth that is going (on) over there,” Wiggs said. Mexico is one of Greater Omaha Packing’s biggest customers. Wiggs claims the disputes over NAFTA and the border wall, so far, have not hurt their business with Mexico. One of the company’s fastest growing markets for beef, according to Wiggs, is the Middle East – especially Saudi Arabia.

“The beef into Saudi Arabia – it’s been legal to ship there for a while, but they put up some regulations that a lot of the packers…aren’t willing to jump through some of these hoops,” Wiggs said. “A lot of times we’re willing to do what, say, a major beef packer may not be willing to do.”

The Greater Omaha Packing Company processes around 2,300 head of cattle per day and employs over 1,000 people. The company ships beef to all 50 states and 70 countries around the world.