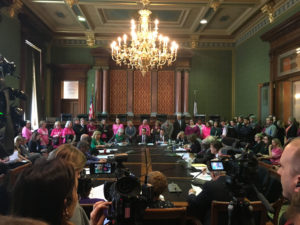 A ban on nearly all abortions in Iowa after the sixth week of a pregnancy has cleared a House committee with the support of a dozen Republicans.

However, at least two of those Republicans made it clear they want changes in the bill if or when it’s debated by the full House.

“I believe that we all respect life in this room, but there’s a disparity between how we treat life inside the womb and how we treat life outside the womb,” Representative Rob Taylor, a Republican from West Des Moines, said before adding this caveat:  “As this bill stands today…it needs a lot of refinement.”

Representative Dave Heaton, a Republican from Mount Pleasant, was another reluctant “yes” on the bill, although he did not voice his reasons during the committee meeting. Representative Michael Bergan of Dorchester was the only Republican to vote against the measure.

All the Democrats on the committee, including Representative Timi Brown-Powers of Waterloo, voted against the bill.

“I’m a mother of one who had eight miscarriages. I would never choose an abortion for me,” Brown-Powers said in an emotional speech during today’s committee meeting. “But I cannot choose for any of you what you would do because, quite frankly, it is none of my business.”

The bill is a merger of two proposals — the ban on abortions after a fetal heartbeat is detected along with a ban on the sale or donation of fetal tissue from a miscarriage or abortion. Representative Marti Anderson, a Democrat from Des Moines, suggested the bill’s abortion ban “intentionally goes too far.”

“The motivation is clear: to create a vehicle to legally challenge Roe v Wade,” Anderson said.

Representative Sandy Salmon, a Republican from Janesville, is among those arguing the ruling that legalized abortion should be overturned.

“Unfortunately a number of things that are legal are also destructive and this is among the worst,” Salmon said.

Representative Mary Mascher, a Democrat from Iowa City, pointed to similar laws in other states that have been ruled unconstitutional in federal courts.

“Iowans are watching…They are listening,” Mascher said. “Iowans will not forget and they will vote.”

Representative Shannon Lundgren, a Republican from Peosta, said supporters of the bill are fulfilling a campaign promise to seek abortion restrictions.