You are here: Home / Education / Ivanka Trump discusses ‘work of the future’ in Iowa (AUDIO) 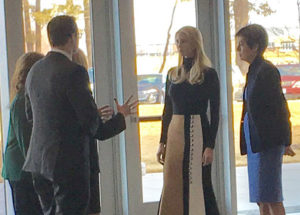 “This is an unbelievable example of innovation in education,” Trump said, “and pairing the skills being taught in a classroom environment with the jobs in demand in the modern economy.”

Trump met with students in two classrooms to see what she called their “work of the future.”

“I was personally very excited to see so many young ladies who were here today because women and minorities have been traditionally underrepresented in STEM fields,” Trump said. “And, as we embark on the fourth industrial revolution, it’s critical that trajectory changes.”

After the tour, Trump sat down for a longer discussion with state officials, teachers, people from businesses involved in the center and students. One student said he had a “light bulb moment” when working on a construction site that has changed his perspective on what he can do after high school.

Trump replied that she had a “special place in my heart construction,” prompting the crowd to laugh. “My old life as a builder — I understand why you’re passionate about it.” 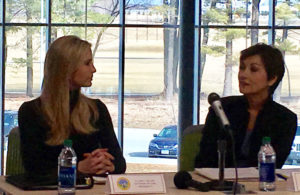 Ivanka Trump at a forum with Governor Kim Reynolds.

Trump promised “a very important component” of the president’s infrastructure proposal would be investment in broadband for rural Americans.

“To be able to innovate and grow their businesses and develop themselves,” Trump said, “by being connected.”

Republican Governor Kim Reynolds hosted Trump, starting with an early morning breakfast at the governor’s mansion, then the tour of classrooms at what’s called the APEX center in Waukee. Reynolds pressed for changes in federal college grant programs — so the grants could be used by high schoolers who take classes at community colleges.

After Trump left, Reynolds told reporters she hopes the “First Daughter” takes that idea back to Washington.

“Really providing flexibility to states, so that we can be innovative and think outside of the box,” Reynolds said.

Trump did not take questions from reporters. Before she arrived, students and staff at the center were warned if they asked Trump questions about politics or “current events,” they’d be escorted out by the Secret Service.