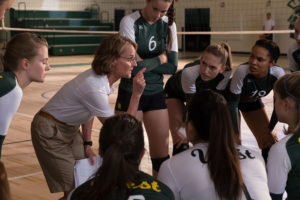 Publicity photo from “The Miracle Season.”

The premiere of a movie based on the true story of an Iowa high school volleyball team was held Sunday in Iowa City.

“Our initial reaction was no way,” Found said. “It’s just too raw and we just don’t need Hollywood playing with our hearts.” Found eventually gave the project the green light.

“We sort of came to the conclusion there (are) no women’s sports inspiration movies out there, and we need one, and this world needs one,” Found said. Oscar-winner William Hurt portrays Ernie Found in the movie. Another Oscar-winner, Helen Hunt, portrays Kathy Bresnahan, the coach of the volleyball team. Bresnahan recalled, following Caroline’s death, the team set a simple goal.

“And that was to play hard,” Bresnahan told KCRG. “And we never did say ‘win for Caroline,’ but we said ‘let’s play like Caroline.’ And that, in itself, was a huge burden because she loved the game.” The team appreciated all the community support that year, especially from one particular fan.

Ernie Found continued to cheer on his daughter’s team, which won the 2011 state championship. Found was mourning two deaths during the time. His wife, Ellyn, died from pancreatic cancer just two weeks after Caroline’s death.