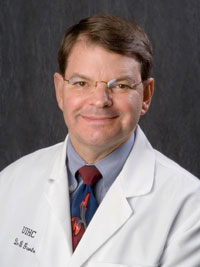 A program at the University of Iowa that’s been researching ways to help people who can’t hear has won another 5-year grant from the National Insitute Health.

Doctor Bruce Gantz leads the research using what are called cochlear implants. “Which are devices to actually stimulate the inner ear nerves so that people can understand words again if they are deaf,” Gantz explains. “And we have explored this technology for over 30 plus years.”

He says the Iowa Cochlear Implant Clinical Research Center has focused on finding ways to maximize the use of the device. “We developed a new strategy in which you can use some residual low-frequency hearing and combine it with the electrical processing of the cohlear implant,” Gantz explains. “And people do much better in noise and they do much better in word understanding if they they have a little bit of residual hearing than if they are so deaf that they can’t hear anything.”

The new funding allows them to continuing to improve the hybrid implant. “Trying to figure out with this new grant where people separate speech and noise in the brain. And looking at functions of the central auditory processing to see how we can improve this technology to expand it to more people,” Gantz says. Gantz says they were excited back when they first started the research when they were able to get someone to understand a a few words. He says they’ve advance now so that most people can use the implant and talk on the phone without needing to lip read. And for some it helps them hear in many situations where it wasn’t possible before.

“Those people who have residual hearing — we are bringing them back into a world in which they can go to a restaurant or be in a loud social environment in their church and actually communicate,” according to Gantz. The research will examine patients on an individual basis, helping researchers to understand why one person hears things differently than another.

Gantz says losing the ability to hear and interact with others is a big problem for people as they age.”It’s the third most common chronic disorder in people over the age of 65. You have hypertension, and athritisand hearing loss are the big three,” he says. Doctor Gantz says hearing loss can especially have an impact on those who suffer from dementia. “We now know that people who have hearing loss withdrawal, they become more depressed, and we think that there is an impact on cognitive function and potentially lack of cognitive function in dementia,” Gantz says. “We know that they withdraw from their social engagements and don’t communicate with people because it is difficult. And we think that these kinds of devices will bring people back and rehabilitate people earlier if we do the procedure before they go profoundly deaf.”

Gantz says they learned early on that people who lost their hearing and sought to get a cochlear implant were the most depressed group of people that psychologists were studying back in the 1980s. He says it used to be that college freshmen who left home for the first time were the most studied for severe depression. “Then all of a sudden this group of people that used to be able to hear and then lost their hearing and became deaf became more depressed than that group,” Gantz says.

Gantz says there is research at John Hopkins and places in Europe that has demonstrated that hearing loss contributes to dementia. “We don’t think it is the cause, but it can significantly contribute to the downward spiral because people do fail to interact socially. And social interaction is really part of the human environment,”according to Gantz.

He says hearing loss is the third most common chronic disorder in people over the age of 65. Gantz says they’ve look at some national numbers of hearing issues to get an idea of how many people could benefit from their advanced implant. “There’s about one-and-a-half million people who could benefit from a standard cochlear implant. We know that if we look at the audiograms of people who would fit the hybred model….it’s three-point-five million people,” Gantz says. “So, it’s three times the number of people who could use the hybrid compared to a standard cochlear implant.”

He says they believe the number of people who could benefit from the hybrid implant may double to seven million by 2060. He says their research will involve scientists from multiple disciplines across the University of Iowa, including computer science, neurosurgery, radiology, psychology, psychiatry, audiology, and music. The new grant is for $12 million.