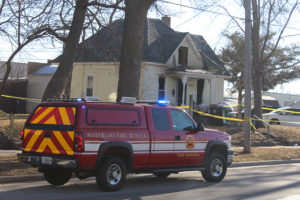 Three people died in the fire at this Waterloo home.

Investigators have ruled out arson, but are still trying to figure out what sparked a house fire that killed three people in Waterloo earlier this month

Waterloo Fire Rescue Chief Pat Treloar says the official cause is still classified as undetermined. However, results of a preliminary investigation show that an electrical problem likely sparked the deadly blaze around 4 a.m. on March 15.

According to Treloar, investigators continue to evaluate potential ignition sources in the area where the fire is believed to have started. Treloar says, “We do not believe there was any deliberate human involvement with the ignition of the fire.” A mother and two of her children died in the fire that gutted the one-and-a-half story home. Firefighters were called to the scene after a girl escaped through a window and flagged down a passing motorist for help.

The fire victims were identified as 33-year-old Amber Everman, nine-year-old Amari Burkett and five-year-old Ava Everman. They were all pulled from the burning house, but died hours later at a hospital.