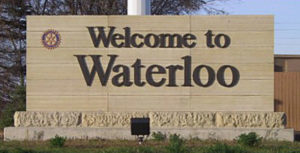 The City of Waterloo is getting more than $47,000 in grant money to document a historically-black neighborhood.

Due to segregation, hundreds of the town’s African American residents once lived in an area known as Smokey Row. The fight for civil rights in the Cedar Valley grew out of that neighborhood. Ed Ottesen, with the city’s historic commission, says that history will be documented.

“There’s been a lot of physical loss of homes in that area,” Ottesen says, “so we’re trying to do this before we lose too much more.” By 1915, some 400 African Americans were living and working in Waterloo. The Smokey Row neighborhood, where they were required to live, was bordered by train tracks and many residents lived in boxcars provided by the railroad.

Ottesen says studying the neighborhood could lead to a national historic designation and a boost in economic development. Ottesen says, “To some extent, yes, it’s a sense of pride, but there’s also still tax incentives still in place that developers can come in, and at least in commercial properties, to be able to rehabilitate them and fix them up.” The grant will fund a building survey and the collection of oral histories.