You are here: Home / Education / Effort underway at University of Iowa to get more students into radiochemistry 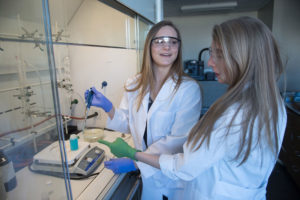 Federal agencies have given the University of Iowa four million dollars in grants to study ways to deal with spent nuclear fuel across the country.

The U-I’s Tori Forbes says finding ways to safely store the nuclear material is just one part of the research. Another is getting the next generation of researchers in radiochemistry. “There’s not as many students going into this field, so we’re currently losing more skilled workers than we are gaining,” Forbes says.

Forbes says federal officials don’t want to lose ground that’s been gained in nuclear research. “That’s why we are getting so much from the Nuclear Regulatory Commission (NRC), from the Department of Energy to really make sure that we have this skilled workforce so we don’t loose all this knowledge that’s been gained since the 1950’s,” according to Forbes. She is an associate professor of chemistry and says students who enter the field are almost guaranteed to find a job once graduating.

“I can tell you that I’ve graduated now about four PHD students and a couple of masters students, and all of them have jobs,” Forbes says. “If you learn how to work safely with radioactive materials — there are lots of jobs out there for you.” Forbes says the idea of working with nuclear waste may seem too dangerous to some — but she says they study isotopes that are less radioactive and apply what they’ve learned to those that are more dangerous.

“The levels that we work with are much less than what you get with a chest x-ray. We work with tiny amounts,” Forbes says. “If there are any parents listening out there, you don’t have to worry about your kids in terms of radioactive exposure if they come to work at the University of Iowa.”

The $4 million dollars in grants the U-I won includes $600,000 grant for faculty to develop the radiochemistry program, and 522-thousand dollars to support fellowships for graduate students in the program.