You are here: Home / News / Supporters rally at Iowa Capitol for convention to develop amendments to U.S. Constitution 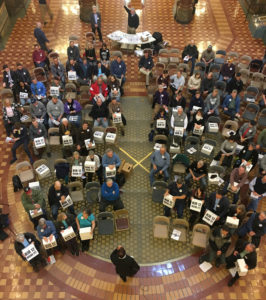 Supporters of a national convention of states rally at the Iowa State Capitol.

There was a rally at the Iowa capitol today organized by backers of a movement to get 34 state legislatures to call for a national convention of the states.

Tom Coburn, one of the speakers at the rally, said the aim is to propose amendments to the U.S. Constitution that would enforce term limits on members of congress, require a balanced federal budget and limit the scope of federal government authority.

“We’re so out of balance now that Iowa doesn’t get to make the decisions for Iowa, you know, somebody in Washington’s making it,” Coburn said. “It never got voted on by the Iowa people.”

Coburn is a former U.S. Senator from Oklahoma who resigned early during his second term to seek treatment for prostate cancer. 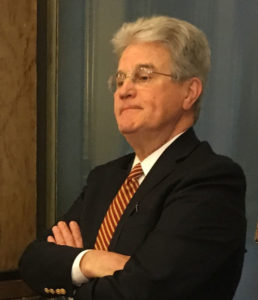 “As a physician, I want to fix the real disease,” said Coburn, who is an obstetrician, “and the real disease is we’re spending money we don’t have on things we don’t need, we have career politicians whose number one goal is to get reelection — in both parties — and number three is the government is way outside the bounds of the enumerated powers.”

Coburn and others encouraged rally-goers to leave cards in the capitol urging senators to pass a resolution calling for a convention of the states. There’s no floor debate or committee work in the Iowa Senate today, so most state senators are not at the capitol.