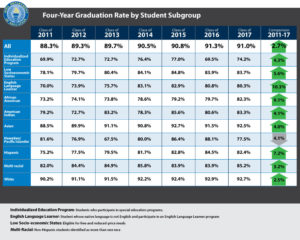 The Iowa Department of Education says there was a small decrease in the graduation rate for high school students in 2017.

The graduation rate in Iowa has increased by nearly three percent since 2011 and the department says despite the small drop last year, there have been long-term gains in every demographic subgroup of students. Graduation rates for African-American students for example, have gone up four years in a row and by more than nine percent since 2011.

“High school graduation is an essential step for every student because it opens the door to postsecondary education and training opportunities that lead to rewarding jobs,” Iowa Department of Education Director Ryan Wise said in a statement releasing the numbers.  “While I’m disappointed in this one-year decrease, our long-term trend is still on the rise and I’m confident we have the right roadmap in place for education.”