You are here: Home / News / Northwest Iowa under a blizzard warning 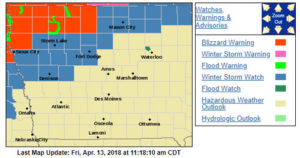 Iowans have enjoyed weather conditions the past couple days that are more typical for mid-April, but a return to winter is right around the corner.

Highs will be climbing into the 70s in some areas this afternoon, before rain and snow move in tonight. National Weather Service Meteorologist Todd Heitkamp says the heaviest snow, 4 to 8 inches, is expected over far northwest and north-central Iowa. A blizzard warning is posted for an area that includes Le Mars, Spencer, and Algona.

“No matter how much snow falls across the area this weekend, the other thing we have to keep in minds is the winds,” Heitkamp says. “The winds are going to be gusting at 40 to 50 miles an hour and that’s going to cause all kinds of reduced visibilities, whiteout conditions, and blizzard conditions in many areas.” Thunderstorms are possible across Iowa late this afternoon and evening. Some could be severe with large hail, damaging winds, and possibly tornadoes.

The rain will transition to snow in many locations. Atlantic, Des Moines, Marshalltown, and Waterloo can expect one or two inches of snow. Heavier snowfall totals are forecast to the north with two to three inches in Carroll and Ames, three to four inches in Fort Dodge and Decorah, and four to six inches in Storm Lake and Mason City.

Heitkamp say this likely won’t be the last winter storm of the season. “We have another storm coming in at us again late next week,” Heitkamp says. “This is just a pattern that is not changing right now. You know, a lot of people are wanting the moisture, but it would be nice to have it in the form of rain instead of snow. Right now, Mother Nature is not cooperating…obviously with this storm this weekend and then the next storm that’s probably coming in probably next weekend.” It’ll begin turning colder this evening. By Sunday, high temperatures will likely remain in the 30s across the entire state.