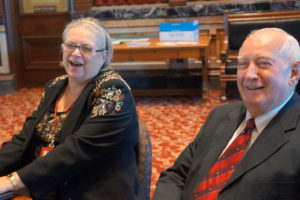 Wally Horn and his wife Phyllis.

The Iowa Senate paused for more than an hour this afternoon for a series of speeches honoring the longest-serving state legislator in Iowa history.

Senator Wally Horn of Cedar Rapids, an 84-year-old Democrat, has been a member of the Iowa General Assembly for 46 years.

“I’m going to miss you dearly, miss the wisdom, miss the advice and also miss the fun,” Senator Bill Dotzler, a Democrat from Waterloo said.

Senator Tim Kaputcian, a Republican from Keystone, said Horn and his wife, Phyllis, took the time to get to know him and his wife.

“The thing that I appreciate is the fact that they were the first to welcome us and respect us,” Kaputcian said, “just like we respect them.”

A couple of senators, including Tony Bisignano of Des Moines, noted the looming exit of the candy dish Horn and his wife have stocked on Horn’s senate desk.

“And so we’ll lose weight and our diabetes levels will go down,” Bisignano said, while another senator used a mild curse word to refer to the candy bowl.

Horn was the last to speak. He reflected on the decades he’s spent at the statehouse in Des Moines.

“I don’t know if I’d do it again. Looking back I probably would, but there were some things I didn’t get done that I should have done more and that is my son and daughter — spend more time with them,” Horn said, pausing for emotion, adding service in the legislature “hurts your family.”

Horn was elected to the Iowa House in 1972 and he crossed paths with two of the state’s well-known Republican politicians. U.S. Senator Chuck Grassley was already a member of the Iowa House at the time and former Governor Terry Branstad won a race for a House seat the same year Horn did.

Horn served 10 years in the Iowa House and has been a member of the Iowa Senate since 1983.

Horn is a native of Bloomfield, Iowa, an Army veteran and a retired school teacher and coach. He worked at Cedar Rapids Jefferson High School after teaching stints in the Washington and the Rudd-Rockford-Marble Rock School Districts.

He was the Senate Majority Leader from 1992 to 1996, shortly after being the senator who helped guide a bill legalizing “riverboat” gambling through the legislature.

Horn told his colleagues he has cast more than 210,000 votes during his tenure in the legislature.