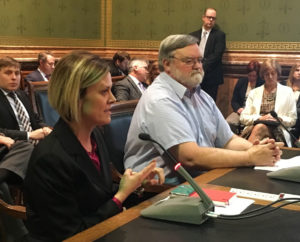 Meanwhile, a representative of one of the nation’s largest “pharmacy benefit managers” is telling lawmakers the businesses and governments that use his company agree to the “spread pricing.”

Mark Frahm, a pharmacist at Southside Drug in Ottumwa, told members of the House Government Oversight Committee his pharmacy was paid about a thousand dollars for the prescription drugs for inmates in the Wapello County Jail in January — but the county paid nearly $5000 to its prescription benefit manager.

“That’s why I’m here, to let you guys know there’s a big discrepancy between the two,” Frahm said. 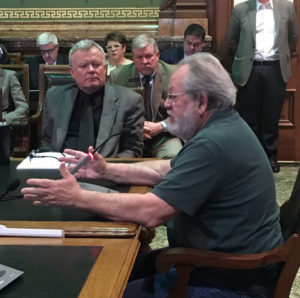 Wapello County Supervisor Jerry Parker said the county is saving money now by buying medications for county jail inmates directly from the local pharmacy, but Parker said they haven’t been able to end the contract with the prescription benefit manager for all county employees.

“There’s something wrong when there’s such a large discrepancy in pricing, but part of that is our fault because we signed the agreement,” Parker said. “Now, we don’t really have the expertise to check all the prescriptions to see where might be getting taken, where we could save money.”

Parker said there’s no reason to think many other Iowa counties, cities and school districts face a similar financial fate.

“The figures don’t lie. We’re losing taxpayer dollars,” Parker said. “If we’re losing, the city’s probably losing and the state’s probably losing, so this committee has a very important job to do. Help us, who can’t necessarily in these positions, help ourselves.”

Rich Ponesse, a senior director at CVS Caremark, told lawmakers there is no “magic formula” and it is the customers who sign the benefit contracts who decide what payments will be made to his company.

“As far as the ‘spread pricing’ is concerned, that is not a secret to our clients,” he said. “We are very transparent with our clients.” 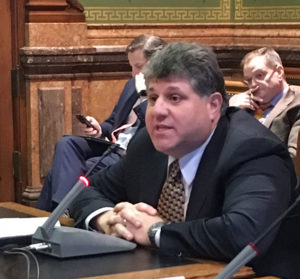 A lobbyist for the Iowa Pharmacy Association told lawmakers pharmacy benefit managers are like a “black box” and other states are moving to establish regulations. A central Iowa legislator who is also a pharmacist got into a heated discussion with Ponesse about the pricing of drugs and how CVS Caremark handles appeals. Ponesse shot back.

“I don’t like being called a liar and not being able to defend myself,” Ponesse said. “…I know exactly what was dispensed and I know what the reimbursement was. I do.”

The legislator, standing and occasionally pacing beside the committee table, uttered a couple of curse words during the exchange. It’s unclear what the House committee may choose to do next. Ponesse offered this parting comment to legislators.

“I am a for-profit company and I’m not ashamed to say that,” Ponesse said. “I’m here to make money.”

Earlier this month, insurance regulators in the state of Ohio forbid insurance companies and pharmacy benefit managers from enforcing contracts that prevented pharmacists from telling patients if a lower-cost option was available for a prescription.