You are here: Home / News / Strings of pearls in Iowa statehouse, in tribute to Barbara Bush 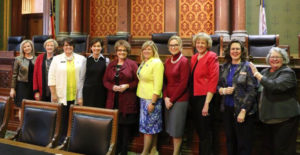 Republican Governor Kim Reynolds and the nine Republican women who are members of the Iowa House are wearing pearls today in honor of former First Lady Barbara Bush.

Mrs. Bush, who died last night, made a string of imitation pearls a staple of her wardrobe. House Speaker Linda Upmeyer of Clear Lake is wearing a long strand of pearls and confirmed to reporters that hers aren’t real either.

“Absolutely faux,” Upmeyer told reporters this afternoon. “No doubt about it. Faux!”

“She was one of those ladies who could just speak her mind really well and you always knew she was being pretty candid,” Upmeyer said. “I liked that.”

In November of 1995 Upmeyer got to visit with Bush when the former first lady visited Mason City and delivered a speech at the community college.

“I had an opportunity to actually sit at the table and visit with her a little during dinner,” Upmeyer said, “so it was nice.”