You are here: Home / News / Tax agreement among 88 Republicans and GOP governor elusive 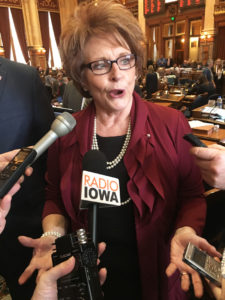 Republican lawmakers say they are “close” to a deal to cut Iowans’ income taxes, but it’s taken a while to find the method and the depth of cuts that all feel “comfortable with” according to House Speaker Linda Upmeyer of Clear Lake.

“I think the thing we have to remember here is that Republicans have waited a lot time to do some tax reform and some tax cuts and there are 88 Republicans here and so it’s not surprising, perhaps, that there are many ideas on how you might approach this,” she says.

Senate President Charles Schneider, a Republican from West Des Moines, says it’s been two decades since Republicans controlled both the legislative and executive branches of state government and had a “serious discussion” about tax policy.

“So these conversations don’t happen very often and we want to make sure we get the policy right,” Schneider says. “There are a couple of things we agree on even though we don’t have a final plan in place.”

There is universal agreement among Republicans that the state shouldn’t get a windfall after federal tax cuts were enacted in December. Without any changes that would happen, because Iowans get a deduction on their state income taxes for their federal tax bill. Republican Governor Kim Reynolds says she does not have a “timeline” for having a final deal emerge from these private talks. She’s been reluctant to make public pronouncements about what should be in the tax plan, too.

“When you start drawing lines in the sand, that makes it hard to have those conversations,” Reynolds says.

House Republicans have voted for a five-year plan that would cut taxes by $1.3 billion. Republicans in the Senate have proposed $2 billion in cuts over the next five years. Senate Democratic Leader Janet Petersen of Des Moines says “there is room” for a tax cut this year, but the size of the deal that may emerge from the GOP’s closed-door negotiations is worrisome.

“The tax plan is still kind of a mystery to us, as to Iowans, and what we’re actually going to see,” Petersen says. “…Democrats have said all along we’d be willing to work on a tax plan as long as it’s fair and takes into account our current budget situation.”

Petersen and Schneider made their comments during an appearance this weekend on Iowa Public Television’s “Iowa Press” program.