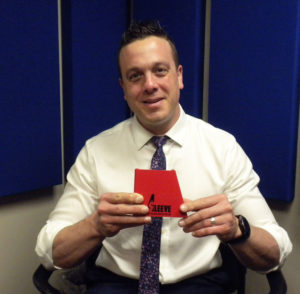 Daniel Nietzel with the Sleeve.

A former teacher in Muscatine worked with other teachers to create a company to provide products to schools to help secure classrooms if a shooter comes into their building.

Daniel Nietzel says they got to work on the issue after they were told to use belts and cords to secure a door during an active shooter drill. He says it took a long time to tie up the door and then the cords broke when tested.

“We figured that there had to be a way to do it more efficiently because two minutes to tie a knot on a door was unacceptable. These situations only last three to five minutes. My wife was a kindergarten teacher — she’s got two doors — this took way too long and it didn’t work,” Nietzel says. One product they designed, called the “Sleeve,” fits over the door opening mechanism and blocks anyone from getting in.

Nietzel says it is a much cheaper solution that trying to redo the doors. The Iowa Legislature passed a bill and the governor signed it into law requiring schools to have an emergency plan in place to handle these situations. Nietzel says other states are also taking such steps and he has been meeting with them on behalf of his company “Fighting Chance Solutions.”

Nietzel says the conversation nationwide has been how they can plan for these events and better equip the teachers to be prepared and trained properly to handle them. Nietzel says small school districts used to think it was a problem that they wouldn’t have to face. He says he’s talked with survivors of the Sandy Hook shooting that thought that before they were hit and now with the latest shooting, the thinking is changing.

“I think districts are realizing we can’t afford anymore not to have that mentality. We need to be proactive. And sometimes even from a liability perspective they are going ‘we can’t in good conscience sit here and tell our teachers that the only defense they have is a belt and a cord between them and an active shooter’,” Nietzel says. Nietzel says his company works with them to develop plans and offers its products to help them.