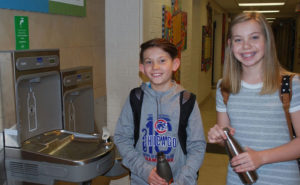 The deadline is next week for Iowa schools to apply to have their water fountains swapped out for water bottle filling stations.

Suzanne Heckenlaible, executive director of the Delta Dental of Iowa Foundation, says they’ve budgeted 300-thousand dollars for this year’s “Rethink Your Drink” program, which should be enough to outfit about 60 schools statewide.

“Priority will be given to schools that have a large percentage of students on free and reduced-price lunch, they don’t have a current water bottle filling station, and they’re in optimally fluoridated communities,” Heckenlaible says. Last year was the first year for the program and Delta Dental spent 230-thousand dollars to retrofit water fountains in 54 schools in 26 Iowa counties. That reached about 28-thousand students, encouraging them to quench their thirst without buying a sugary soft drink.

“Not only are we bringing the water bottle filling station to the school, we’re also bringing water bottles to every child there,” Heckenlaible says, “so they actually have the tool to fill up their bottle throughout the day to ensure they are hydrated.” Each child also gets a toothbrush and a book mark. Despite efforts by families, schools and public health agencies to educate students on better drink choices, kids often choose caffeinated beverages, sports drinks and energy drinks — or they just go without.

“We know that more than 50% of children and teens in the U.S. are not properly hydrated during the school day,” Heckenlaible says. “Certainly, that can impact cognitive functions and energy levels throughout the day.” By choosing water, she says students and staff are more alert, better hydrated, protect their tooth enamel and make their teeth more resistant to cavities. An added plus, in the first three months of the program, she says more than 200-thousand plastic water bottles were saved from Iowa landfills.

The deadline for schools to apply is May 1st at the following website: www.deltadentalia.com/H2O