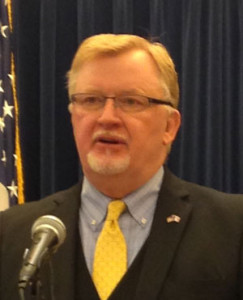 The inappropriate behavior of a state official Governor Kim Reynolds fired in late March was escalating and made women feel unsafe at work, according to an employee who wrote a letter outlining complaints about her boss.

Governor Kim Reynolds released the letter this afternoon, at the request of the woman, with some passages blocked out to try to preserve the identity of the Iowa Finance Authority employee who wrote it. Reynolds fired Iowa Finance Authority director Dave Jamison shortly after receiving the information. It alleges Jamison tried to pressure his employee to go to his hotel room and talked repeatedly in the office about sex.

Jamison, according to the letter writer, knew he was engaged in sexual harassment because he often referred to prominent men like Matt Lauer and Harvey Weinstein who were fired for alleged sexual misconduct. The woman who wrote these and other lurid details down in a letter gave the governor permission to publicly release the document.

Governor Reynolds has issued a statement, calling Jamison’s behavior “disgusting and abhorrent.” Reynolds added that information like this “should only be released on the victim’s terms and no one else’s” because it is their story to tell.

On Monday, Reynolds told reporters there were no paper documents related to Jamison’s firing and she did not intend to reveal the reasons for his dismissal to protect the victims of Jamison’s actions. In addition, Reynolds argued the new state law that requires public disclosure of the reasons state employees are fired does not apply because Jamison was an “at-will” employee she appointed to the job rather than a worker hired under the state’s merit-based system.

The executive director of the Iowa Freedom of Information Council says the way he reads the law, it applies to all state employees and state officials, including Jamison.

Democrats say the kind of predatory behavior described in the letter is sickening and they accuse the governor of trying to cover up the actions of a long-time political ally by initially refusing to release specific reasons for Jamison’s firing.