You are here: Home / Fires/Accidents/Disasters / Multiple departments fought fire at motel near Walnut 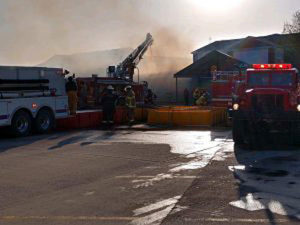 Firefighters try to control the fire at the Super 8 near Walnut.

A sold-out hotel in southwest Iowa was heavily damaged by fire on Sunday morning and although the place was packed when the fire broke out, no one was reported hurt.

Doug Reed, with Pottawattamie County Emergency Management, says the fire was reported at the Super 8 near Walnut around 6:40 A.M. Reed said the first fire crews on the scene found smoke and flames visible.

“Their immediate actions were to evacuate adjacent rooms in the immediate fire area,” Reed says. “The hotel was able to advise crews that they had 31 rooms occupied from the previous night’s census, so all of those rooms, everyone was evacuated from the entire hotel.”

Firefighters were able to douse the flames after making “trench cuts” in the roof and pulling the ceiling down in some areas to ventilate the smoke. Reed was thankful so many neighboring communities responded to the fire. He says a dozen agencies were on the scene, including nine fire departments (Walnut, Atlantic, Marne, Oakland, Hancock, Harlan, Avoca and Shelby), the Pottawattamie County sheriff’s office and the Iowa State Patrol.

“We have a total of 36 trucks on scene working and 75 personnel working emergency operations right now,” Reed says. “We’ve got another department 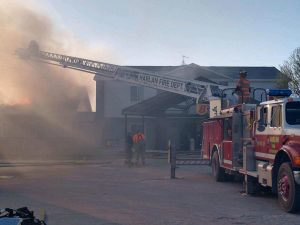 on their way here to help refresh crews, things like that.” There were no fire hydrants nearby from which to draw water, so Reed says several tanker trucks made repeated water shuttle runs from sources in Walnut to the fire scene. By 9:30 A.M., some 8,000 gallons of water were on location. Among the evacuees, Roberto Jimenez, from Galveston, Texas, was a guest in the hotel. He was awakened early and went to investigate, in bare feet and wearing only shorts.

“It smelled like barbeque at first and then I realized the room was filling up with smoke and I went outside and the hallway was full of smoke and the door shut right behind me,” Jimenez said, laughing. “I couldn’t grab none of my crap and I’m waiting to see if my stuff’s still good inside there. It was a rude awakening for everybody.”

Someone gave Jimenez a jacket to stay warm. Investigators say the fire appears to have started near the swimming pool but an exact cause is still unknown.