You are here: Home / News / GOP tax plan, still under construction, to be debated Saturday 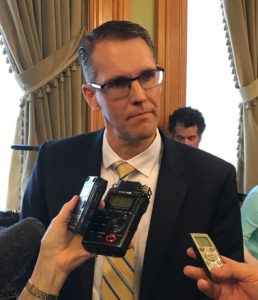 A 49-page analysis of the tax bill Republicans in the statehouse plan to pass this Saturday has been released, but the actual legislation is still being written tonight. Republicans on a Senate committee approved a tax bill this afternoon, but Senator Randy Feenstra of Hull said it will be replaced during Senate debate with the plan that’s still under construction.

“We’ve talked about this for decades, that we have the highest rates in the nation both individually and corporately,” Feenstra told reporters after the committee meeting. “So we believe if we can start rolling back those rates, that helps the families, that helps the local businesses and we can compete.”

Democrats in the Senate are objecting to the part of the GOP plan that would impose the state sales tax on what some call the “new economy.” The sales tax would be charged on Netflix subscriptions, cell phone apps, e-book purchases and ride sharing services like Uber and Lyft as well as traditional taxi cabs. Senator Matt McCoy, a Democrat from Des Moines, said these taxes will hit low-income Iowans, particularly the elderly, who do not have a car.

“We’re talking about grandma’s ride to the grocery store to buy a quart of milk, a loaf of bread and a can of cat food for Muffy, the cat,” McCoy said during the committee meeting. “…We’re going to put a sales tax on her ride and that just isn’t right to me when she’s living on a pension and a fixed income.”

Senator Rob Hogg, a Democrat from Cedar Rapids, said Republicans propose new state taxes on digital products to make up for the income tax cuts in their plan.

“There really is something wrong when raising taxes that are being paid by ordinary Iowans so that the wealthiest corporations and individuals in this state can get tens of thousands of dollars of tax cuts,” Hogg said.

Feenstra said “digital goods” should be taxed just like items purchased in Main Street stores are.

Last Friday evening, Governor Kim Reynolds announced she and her fellow Republicans in the House and Senate had struck an agreement on taxes, but legislators still have been hammering out the details this week.