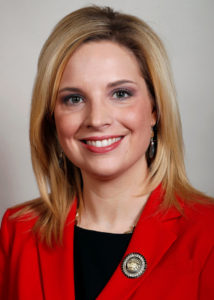 A new policy the Iowa legislature approved on its final day would force statewide elected officials and members of the legislature to use their campaign funds rather than tax dollars for “self-promotion.”

Representative Ashley Hinson, a Republican from Marion, encouraged her colleagues to pass the policy.

“This would restrict the spending of public money for paid ads or promotions bearing name, likeness or voice of that person from mass mailings; radio, TV, newspaper, internet ads or promotions or an exhibit display at the fair,” Hinson said last Saturday during House debate.

The governor and other elected officials have had booths at the Iowa State Fair for years.

“Currently, I believe they are using taxpayer dollars for the displays and for the space as well,” Hinson told her colleagues.

If the governor approves this new policy, that will end for the 2018 Iowa State Fair. The new policy also is likely to bar Republican Governor Kim Reynolds from appearing in ads planned this fall to promote the “Future Ready Iowa” program.

Democratic State Treasurer Michael Fitzgerald will no longer be able to appear in ads promoting the state’s College Savings Iowa program. Representative Marti Anderson, a Democrat from Des Moines, opposed the idea. “This section would cause these elected officials to have to pay for things that are even part of their duty,” Anderson said. “…People have the right to know and see their elected officials and to hear directly from them.”

Hinson said it’ll be up to the Iowa Ethics and Campaign Disclosure Board to enforce this new policy and it means Secretary of State Paul Pate might have to reimburse the state if any fliers from his office about voter registration contain his name or photo. Democrats say the stickers on every gas pump in the state that have the written name of Iowa’s secretary of agriculture may have to be removed.

Hinson was unmoved by those arguments. “This applies to anybody, regardless of party,” Hinson said during House debate.

The Ethics Committees in the Iowa House and Senate will police members of the legislature who are accused of using tax dollars for self-promotion if the governor approved this new policy. It was inserted in a catch-all budget bill that cleared the legislature last Saturday.