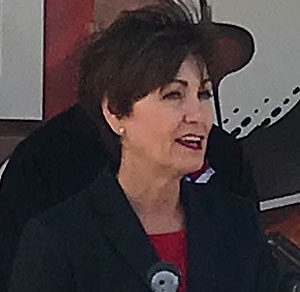 Governor Kim Reynolds says the new limit she’s approved on utility fees that finance energy efficiency programs doesn’t detract from the Iowa Energy Plan she released about a year and a half ago.

“It’s a balance and I think it does fit with it,” Reynolds said late this morning. “The bill provides hundreds of millions of dollars in reduction to rate payers and it balances that with a very robust energy efficiency program.”

Reynolds signed legislation last Friday that places a two percent cap on the charge on electric bills that’s used to finance rebates and other incentives for customers who replace old appliances, install new windows or take other steps to make their homes and businesses more energy-efficient.

MidAmerican Energy announced today its customers will now pay about $90 million less for energy efficiency programs as a result of the change.

A 1990 Iowa law established the utility-run energy efficiency programs, but the charges that supported the programs have not been disclosed on electric and gas bills. Some charges were as high as nine percent, tacked onto customers’ utility bills. The new law requires electric and gas bills to show the assessment, which is now capped at two percent.

Critics say that cap is too low and many customers cannot afford energy efficiency measures in their homes and businesses without the rebates. Some of the people who helped Reynolds write her Iowa Energy Plan in 2016 say the new law contradicts the report’s emphasis on energy conservation.