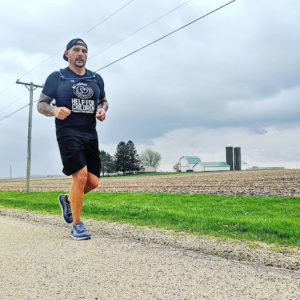 A 48-year-old who’s running across the country to raise awareness about childhood sexual abuse crossed into Iowa Wednesday. Christian Griffith says his goal is to get people to talk openly about abuse — just like they’d talk about any other disease.

“If I was to do just another marathon, nobody would be paying attention,” Griffith says, “but I chose to do something big, something that’s seemingly insurmountable because I wanted a platform to talk about something that people are just simply not talking about.”

Griffith, who is from Atlanta, Georgia, is calling his 3000 mile trek “Run2Heal” and he’s trying to raise a million dollars for a group called “Help for Children.” The group gives grants to local child abuse prevention and treatment programs.

Griffith first told someone he had been abused as a child in the fall of 2015, when he was 45 years old. Griffith began getting counseling and treatment in February of 2016 — and Griffith says he’s found talking frankly about the abuse he endured as a child is important.

“I know and understand what it feels like to isolate and hide from that and feel like your situation’s different or you’re unique and you can’t talk about it,” Griffith says, “and I want people to feel comfortable with the fact that they absolutely can talk about it and all of the fears that they have and the labels that are going to come at them when they do — none of that’s going to happen.”

Griffith began skateboarding in his teenage years and then pursued more “extreme sports” as an adult because it had a calming effect.

“It made it so it didn’t have to think about home,” Griffith says. “…I kept finding greater and greater challenges to numb the pain or kill the demons — whatever you want to call it.”

Griffith says talking openly, frankly and “loudly” about abuse is important and Griffith is making stops along the way to talk with groups about the issue. Griffith spoke with Radio Iowa shortly after he left DeWitt on Wednesday. He runs about 30 miles a day. That means it’ll take him about a week-and-a-half to run across the state.

Learn more about his journey here.

Today, he starts in Clarence and will end 33.9 miles later at Maddi B’s Pizza in Swisher. On May 11, He’ll run from Swisher to Ladora. After a rest day, he’ll leave Ladora on May 13 and stop 33.8 miles later in Grinnell.