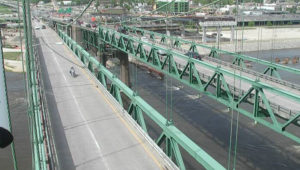 The I-74 bridge from Iowa into Illinois.

The proposed five-year Transportation Improvement Program that was released this week includes more than $1 billion in funding for bridge repair and improvement.

DOT spokesman Stuart Anderson says this will continue the ongoing effort to keep up with bridge maintenance. “That has been a real focus for the (Transportation) Commission, is increasing the amount of money they dedicate to what they call ‘stewardship investments’,” Anderson says, “so that would be investments in existing pavements and bridges. So, we have seen a significant reduction in the number of bridges on the state highway system that are structurally deficient.”

Anderson says the effort has made progress in updating bridges. “It’s gone from 256 bridges in that condition down to 51 in 2017,” Anderson says. One of the bridge projects in the plan is the I-74 Mississippi River Bridge replacement in Bettendorf. Anderson says keeping up the maintenance of bridges is a constant concern.

“While we’re making good progress on those bridges now, we are going to be seeing a wave of bridges that were built 40, 50, 60 years ago that we expect will need replacement in the next 5-to-10 years,” Anderson says. The plan is available to view on the DOT website and the Transportation Commission will act on final approval during their business meeting on June 12th.