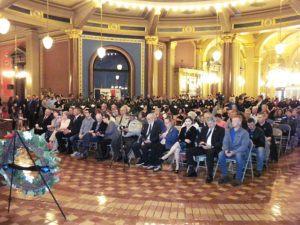 Hundreds of law officers gathered in the rotunda of the Iowa State Capitol today for the annual ceremony honoring fallen officers. Rain forced the ceremony that’s normally held outside at the Peace Officer Memorial site up the hill to the capitol building.

Iowa Department of Public Safety commissioner, Roxann Ryan, opened the ceremony to honor six fallen officers. “This is always a time for heartfelt remembrance and a time to thank all of the peace officers who are here today. And every officer who serves across the state and across the country, and every retired peace officer who is here, so that we may show our respect for all of our law enforcement officers.”

Colonel Jeff Ritzman of the Iowa State Patrol read a description about how each officer died in the line of duty — with the most recent death being Pottwattamie County Deputy Mark Burbridge. “On May 1st, 2017, Deputy Mark Burbridge was shot after he and fellow deputy Pat Morgan transported two prisoners to the Pottawattamie County jail from the courthouse,” Ritzman says. Burbridge died following the shooting. 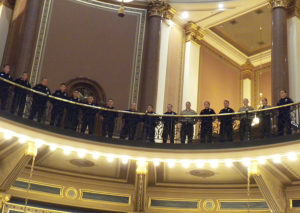 Police cadets watch the ceremony from above.

The others honored are: Special Officer Timothy O’Brien of the Chicago, Milwaukee & St. Paul Railroad, who died October 2, 1893 after was shot by a man he found riding a freight train.

Special Officer Charles E. Crill of the Chicago & Northwestern Railroad, died March 17, 1917 after being shot while trying to apprehend a man breaking into a boxcar.

Deputy William A. Maxwell of the Plymouth County Sheriff’s Office, died November 16, 1919 after being shot by a pistol smuggled into the jail as he and his father Hugh who was the Sheriff, tried to feed the prisoners.

Deputy Robert McKinley of the Pottawattamie County Sheriff’s Office, died March 13, 1947 as he responded to an accident and his patrol car went into a creek bed.

Officer William E. Hickman of the Indianola Police Department died December 6, 1957. He lifted a drain tile while investigating an accident and that led an injury and a blood clot in his lung. 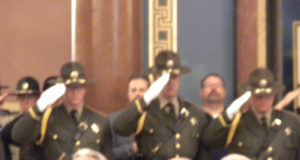 The family members or representatives of the officers were each presented a flag to honor the officer. Governor Kim Reynolds spoke about the fallen officers. “Their courage, valor and tenacity will be eternally captured on the monument, so that we, all of us may never forget their selfless sacrifice on behalf of others,” Reynolds says. The governor also spoke to the law officers in the crowd.

“We deeply appreciate your dedication, passion and bravery within this noble profession,” Reynolds says. “It is important to show our gratitude to all of those who serve protect us. In addition, we should recognize their families and loved ones as well. Because we know behind every uniform and badge is an officer who has others depending on him or her returning home after each shift.”

The Iowa State Patrol Honor Guard stood outside on the state capitol steps for the 21 gun salute. The Peace Officer Memorial was moved in 2012 and now sits down the hill from the Iowa State Capitol near the Department of Public Safety building.