You are here: Home / News / Clarksville prepares party for Maddie Poppe as she advances to finals of ‘American Idol’ 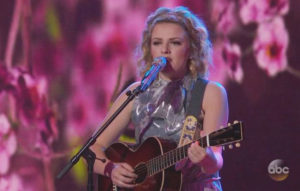 Iowan Maddie Poppe is among the final three on ABC’s American Idol.

The 20-year-old from Clarksville was among the top five contestants who performed live Sunday night. The Mother’s Day show included a segment with Poppe’s mom, Tonya.

“The thing I’m most proud of is not even how talented you are, but the kind of person you are,” Tonya said. “You’re humble, you’re kind to everyone, and that’s what I think makes you the most unique in this whole thing and what I’m most proud of, so keep being you.” Poppe performed the Beach Boys’ song “God Only Knows” as a tribute to her mother.

Poppe also performed “I Told You So” – a Carrie Underwood song.

Poppe learned at the end of the show she’ll be part of next week’s two-part finale. Before THAT, Poppe will be performing at the Butler County Fairgrounds in Allison. The free concert is scheduled for Tuesday night at 6:30, following a 5 p.m. parade and pep rally in downtown Clarksville in support of Poppe.