You are here: Home / Crime / Courts / Heavy equipment will help in the search for La Porte City teen 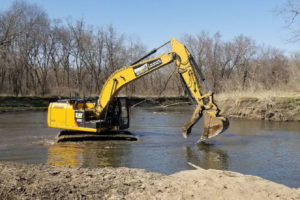 An excavator will help search Wolfe Creek and Cedar River.

“We don’t need any thanks, the gratitude goes the other way,” Hurley says. “There are such fine people in this community of La Porte and surrounding (area) that just keep at it and are persistent and they’re not going to give up. I don’t think we wanted to do anything but help them along that path.”

The Black Hawk County Gaming Association distributes grants from gaming revenue. Hurley says the association’s board decided to make the emergency grant after La Porte City firefighters last week made a public request for donations to help defray the costs of the search.

“We care for one another and care about one another,” Hurley says. “That’s the true Iowans that we are and that’s the emotion that hit everybody last Wednesday night when we saw on the local news the story. It was instantaneous that this is what we’re going to do.” Hurley, his wife, and several members of the Gaming Association board were among the hundreds of the volunteers who combed the fields and woods around La Porte City during the initial days of the search. The 16-year-old Wilson went for a walk near Wolf Creek on the night of April 7th and didn’t return home. 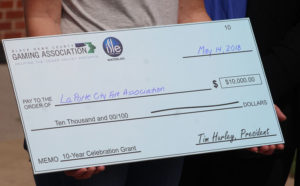 “This is a grant from the heart. There’s just no doubt about it,” Hurley says. “I was not surprised, but elated, at how quickly those board members came together as said: ‘Do it and do it as fast as we can.'” La Porte City Police Chief Chris Brecher says the donation is a tremendous help — and more dollars are coming in.

“You’re very thankful for the community that you live in, that there are some people willing to step in from the smallest donations to something as sizeable as this, with the 10,000,” Brecher says.

Authorities are concentrating on a section of Wolf Creek near the Cedar River because search dogs reacted like something might be in the water. “We have had some indications that the possibility is there,” Brecher says. “We’re not just searching this area for nothing. We definitely have reasons that we’ve been brought here.”