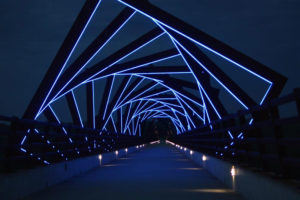 The High Trestle Trail at night.

Two of central Iowa’s most popular bicycle trails are another step closer to being joined into what one backer calls a “mega-trail.”

A $15,000 grant was landed this week from a federal trails group that will help extend the High Trestle Trail from Woodward to connect with the Raccoon River Valley Trail in Perry. Mike Wallace, executive director at the Dallas County Conservation Board, says they’re working with some two-dozen landowners.

The Raccoon River Valley Trail runs a total of 89 miles while the High Trestle Trail is 25 miles long — and it links to other trails extending into Des Moines and well beyond. Closing that nine-mile gap is part of a five-million dollar project, Wallace says, and the timeline is still fluid.

“We need to raise another $2-million, so when that happens, I can’t really tell you,” Wallace says. “We apply for state grants, federal grants, private grants, foundations, all those types of things. It’s a slow process.”

The High Trestle Trail has won international acclaim, in large part thanks to the 130-foot-tall bridge and its 43 diamond-shapped ribs, which are illuminated by cool blue lights at night. The trail goes through towns like Woodward, Madrid, Slater, Sheldahl and Ankeny. A recent Iowa State University study found each rider spends between $6 and $20 per visit.

“It’s a real shot in the arm especially to smaller communities,” Wallace says. “All of the sudden, thousands of people are coming to their community, whereas before they’d be driving right through and not stopping at all. It really does make a significant difference for all communities, whether it’s small or large.”

The north loop of the Raccoon River Valley Trail connects 15 communities and four counties in what’s believed to be the longest paved loop trail in the country at 72 miles.