You are here: Home / News / Two candidates competing to be Libertarians’ nominee for governor 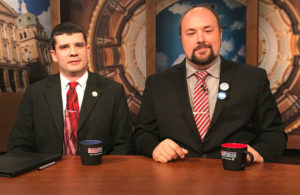 Libertarian presidential candidate Gary Johnson got more than two percent of the vote here in Iowa in 2016, an important threshold. It means Libertarians have achieved “official party status” and there’s a Libertarian Party Primary on June 5 along with primaries for Iowa Republicans and Democrats.

“Libertarians believe that you should be free to live your life as you see fit, so long as you’re not harming anyone else,” Porter says. “I like to say we take the good from the Democrats and the Republicans and we toss out the bad. Democrats tends to believe in more personal freedoms, but fewer economic freedoms. Republicans tend to believe in more economic freedoms, but fewer personal freedoms.”

Battaglia, a self-described “jack of all trades” who’s worked in journalism, banking, insurance and the home mortgage industry, says Libertarians favor “peaceful” change — and one change he’s focused upon is legalizing marijuana for recreational and medical use.

“The time is here to be bold because I’ve heard from thousands of Iowans since starting my campaign on this issue,” Battaglia says. “…In this state, we need a governor who is passionate on cannabsi and hemp, ending those prohibitions.”

Porter says the first step is to decriminalize marijuana and quit jailing non-violent offenders caught with the drug.

“Especially with our prison populations over capacity as it is…is marijuana something we should really be focused on?” Porter asks. “I would be in favor of legalizing it and taxing it as well.”

“We do have a place, an example in the country of New Hampshire that actually has no imcome tax, no sales tax, so it is an achievable goal,” Battaglia says. “And they still have top notch education, world class health care (that’s) affordable, by the standards of the rest of the country.”

The two candidates made their comments during an appearance on Iowa Public Television’s “Iowa Press” program which airs tonight at 7:30 and Sunday at noon.