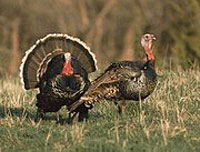 Iowa turkey hunters took home 11,700 birds this season which ran from April 7th to May 20th. DNR wildlife biologist Jim Coffee says that was down just 78 turkeys from last year.

The total is good considering the weather conditions when things got started. “It had a lot of people concerned,” Coffee says, “we had some very cool weather to begin with and we ended up with some pretty warm weather at the end. What it shows you is that turkey hunters are pretty consistent. As long as we get out there and get after them, we are going to be successful.” He says the snowy weather early may’ve hurt the hunters more than the turkeys by making it tougher for them to sneak up on the birds.

“Those extreme conditions can kind of shut them down as they look for food or maybe the hens aren’t quite as receptive because of the weather conditions. But overall it’s still going to be the same type of turkey spring, you’re still going to be out in those areas where turkeys are going to be visible and be heard,” Coffee says. “What makes it a little harder for us is that we just don’t blend in as well with our camouflage typically.” Blending into the woods is important as turkeys are one of the toughest animals to hunt and only about one quarter of those who buy a license are successful.

“You know a 20 to 25 percent success rate is considered pretty good across the country. And our successful hunters some years aren’t successful. So overall, it’s just a matter of how much time you put into it and some good old fashioned luck,” according to Coffee. Turkey hunting hit is peak for participation around 10 years ago and since then Coffee says they’ve seen some decline.

“We have what we call churn — which is people who get in and get out of turkey hunting,” Coffee says. “We see some people trying it again and people falling out. And then we have our avid turkey hunters which are just hose who go every year and potentially get multiple tags — because you are allowed two tags in the springtime.” He says deer hunters are often the ones involved in the “churn.”

He says deer hunters often see a lot of turkeys in the fall decide to try turkey hunting in the spring. “And then they don’t realize that there is a little bit different skill set involved and those people may get in and get out a little bit more frequently,” Coffee says. There were nearly 50-thousand tags purchased for the recent turkey season.