You are here: Home / News / Children learn about skateboards and physics at Coralville museum 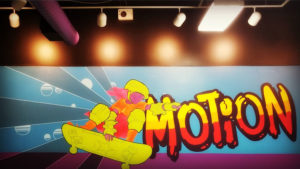 An unusual exhibit is now open at the Children’s Museum in Coralville that’s designed to teach young people about the physics of skateboarding.

The hands-on exhibit uses evolving skateboard design to teach about such scientific principles as gravity, friction, energy, time and distance. John Dunkhase, a professor emeritus in the University of Iowa School of Education, says from what he’s seen, the kids are learning.

Dunkhase says, “Not only were they having fun, but they were purposely trying to measure how fast different kinds of skateboards went down there, and they were putting different weights on them to see which one went farthest and fastest and those kinds of things.” The technology of skateboards has come a long way since the 1960s when rollerskate wheels were simply hammered onto boards, as shown in the now-permanent exhibit called “Notion of Motion: Science of Skateboarding.” Dunkhase, who served as a consultant on the exhibit, says researchers will want to see how children interact with it.

“How often and how long kids stay at the different stations of the exhibit and see what they do,” he says, “how long they stay there, how engaged they are, how they manipulate things, what they come up with.” The exhibit was made possible through a grant of nearly one-point-three-million-dollars from the National Science Foundation.